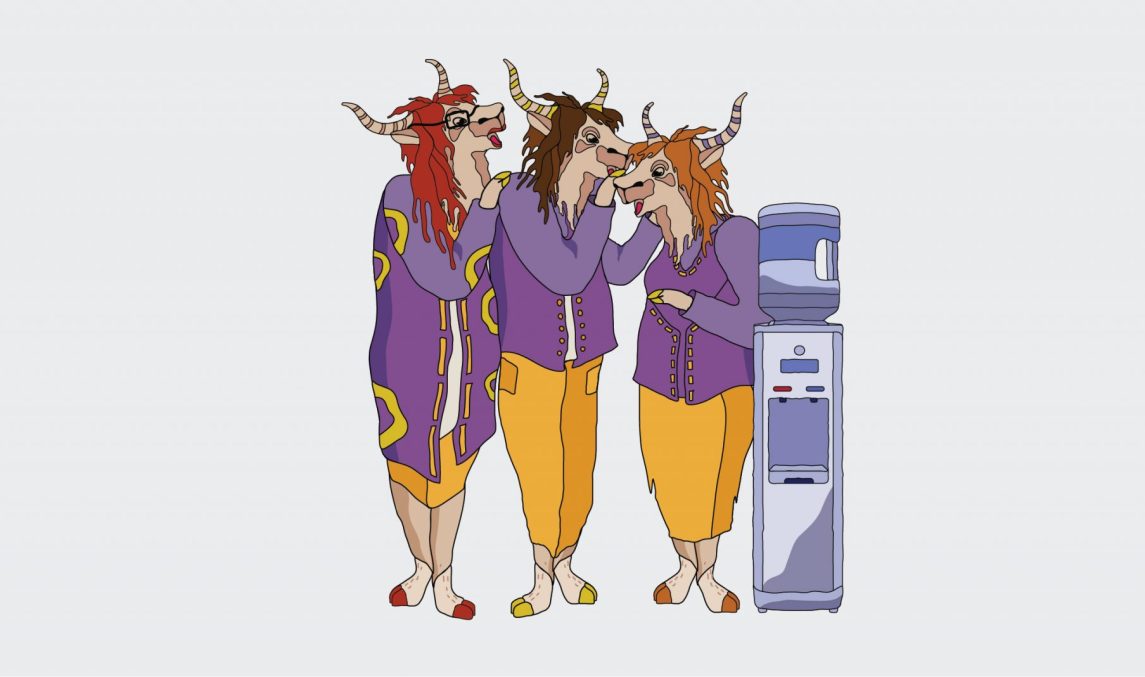 This story has been updated. Please see below.

As he does every weekday morning, an agency executive opened up the professional networking app Fishbowl one Wednesday in March and idly ran through some anonymous threads. He froze when he saw on some threads a mention of his agency citing its purported loss of a major account and planning layoffs. The exec knew this account was not true. But the rumor had seemingly taken on a life of its own: On the app as well as the company’s Slack threads, everyone was discussing this. “We had managers try to dispel the rumors, but in some ways it was almost too late,” he recalls. “It took on a life of its own.”

Gossip has probably always existed in the workplace. Researchers say it can serve as a glue to cement relationships and bring a jolt of energy to normally drab life in offices. Research by psychology professor Frank McAndrew at Knox College has suggested that gossip possibly evolved as a part of natural selection. His theory: Knowing more about people means someone can figure out whether to trust them. And the people one chooses to share more with are those more trusted. Never mind that gossip isn’t always completely accurate.

But the proverbial water cooler in recent years has been replaced by Slack, Gchat and other instant messaging tools. With the workplace ever more connected, productivity tools have been weaponized as unofficial company news services.

“We look at gossip as a form of sentiment,” says an agency CEO who declined to speak on the record. “There are now more places where the chat materializes. There’s Slack and Fishbowl and the comments section on blogs and Twitter. We’re in a culture of venting.”

This culture of venting is also driven by another, more difficult to pin down, force: the very ways people are working today. People are spending more time at work. For individuals who are just entering the workforce, the lines between “work” and “not work” are blurred. Work friends are also regular friends. That means that work-life discussions are also discussions between friends. This can be good for workplace bonding but potentially problematic if it leads to the rapid spread of misinformation.

Agencies have been doing more to detect and respond to problematic “gossip.” TBWA/Chiat/Day has purchased IBM’s Social Pulse software so as to monitor public channels and posts for potential red flags or specific sentiments. The Martin Agency uses a feedback survey tool called TinyPoll to ask employees quick anonymous questions to identify what exactly workers are concerned about. At another agency, its communications and PR teams peruse the app Fishbowl, as part of the morning routine.

A PR lead at one indie agency caught misinformation about her organization and used it to get ahead of the nonstory. “We are all forced in all ways to care more about what people are saying,” says the agency’s CEO. “One of the corollaries to everyone gets a trophy is everyone gets a voice.”

Agency executives say it makes sense to try to be on the alert. One advertising employee says her coworkers leaked gossip to outlets like the blog Agency Spy when “they felt like agency leadership wasn’t being transparent.” Up until a couple years ago, the blog included a comments section rife with rumors and gossip. She adds, “It was a way to force leaders to address things, and it worked.”

According to Fishbowl founder Matt Sunbulli, “Gossip travels differently in siloed channels like IM or Slack than [on] open networks where people know leadership is reading” comments.

Sunbulli says he has witnessed agencies’ reaching out for information after reading certain comments on Fishbowl. “I won’t disagree that gossip is being weaponized,” he allows.

With this as the new reality, advertising companies like The Martin Agency of Richmond, Virginia, are sharpening their focus on transparency and trust, says talent head Tina Chamberlain. The idea is that if they can get ahead of potential situations by being truthful, they can avoid gossip.

And things have shifted quite a bit at Chamberlain’s agency, where about two years ago the longtime creative chief Joe Alexander departed after alleged sexual harassment claims surfaced. When Kristen Cavallo became the new CEO, the agency put its “values” front and center, says Jaclyn Ruelle, who is Chamberlain’s partner in this effort.

“The agency is a brand, and the people are part of the brand,” says Ruelle, The Martin Agency’s director in charge of cultural impact. “Our values have to be focused on candor. Gossip happens every day, but the key now is to be on the front foot,” she observes. “If we’re open and honest about what is going on, then that mitigates [against material from] closed channels popping up on Slack. That can prevent instances of trivial gossip.”

Says TBWA CEO Rob Schwartz: “It goes back to the movie ‘Player.’” He adds, “All rumors are true.”

Correction: This story initially said Agency Spy was defunct. It is still in operation.