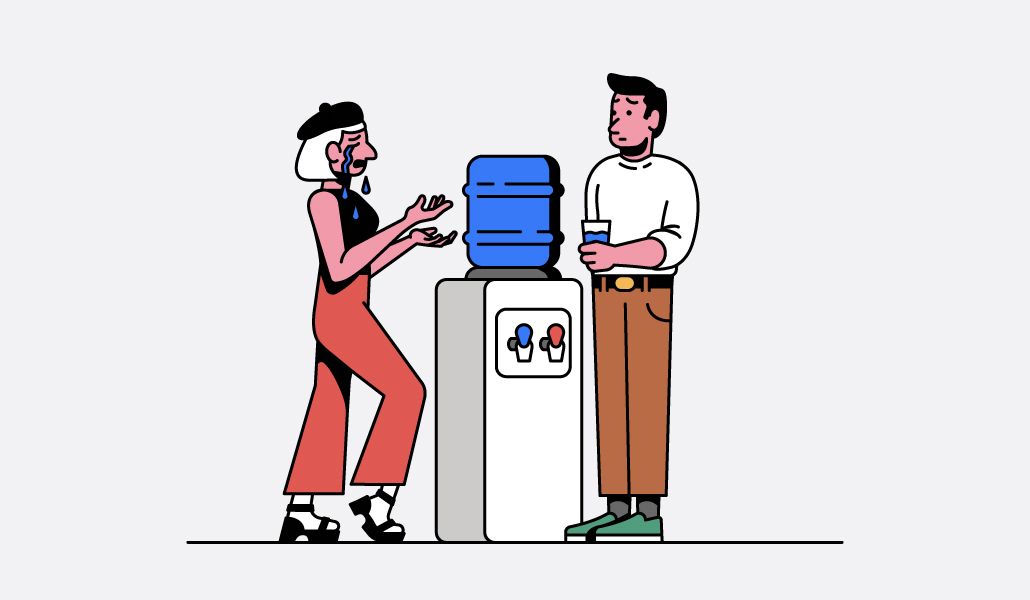 Braden Wallake, now known as the “The Crying CEO,” went viral last week after posting a tear-stained desk selfie to LinkedIn. He’s not the first professional to get deeply personal on the networking site. But the incident (which was not entirely well received online) confirms we have entered a new era of workplace emoting. Even under less dramatic circumstances — Wallake wept after laying off two loyal employees — workers are wearing their hearts on their sleeves like never before.

Sharing your raw emotions at work (or on LinkedIn) can actually benefit your career and build camaraderie. But the intention is everything.

Crying at Work: The Final Frontier

In her best-seller Bossypants, Tina Fey advises working women to, “Cry sparingly. (Some people say ‘Never let them see you cry.’ I say, if you’re so mad you could just cry, then cry. It terrifies everyone.)”

That Wallake, the CEO of marketing firm HyperSocial, chose to amplify his response on LinkedIn — that last bastion of buttoned-up corporate propriety online — shows there are fewer spaces, real or virtual, where tears are verboten. The archetype of the impenetrable corporate climber is out of vogue.

Ludmila Praslova, a professor of psychology based in Southern California, who frequently posts about crying at work on LinkedIn, does so in an effort to normalize it and find solidarity.

“People are asked to leave their humanity at the door [in professional settings],” she said. “It’s something I observed for decades and across cultures.”

But the tide is turning. Susan Cain, author of Bittersweet: How Sorrow and Longing Make Us Whole writes in The Atlantic that employers deny workers’ emotional lives at their own peril: “Sadness is a central part of our lives, yet it’s typically ignored at work, hurting employees and managers alike,” Cain wrote in the Atlantic.

Being “in our feelings” at work is a movement. Experts attribute this sometimes-messy cultural shift to the “whole self” ethos. That movement, once championed by a niche group of leaders, is widespread thanks to the stress and burnout of the pandemic. There’s also the ascendance of younger, more emotionally-transparent professionals, who comfortably use words like “triggers” and “trauma” during job interviews, as one employer told us.

“Everybody started getting louder about the stress of closing daycares, sick family members, loneliness and isolation,” Lauren Lefkowitz, an executive leadership coach, told WorkLife. “There was also a sense of respect for people who were willing to say out loud, ‘I’m drinking too much,’ or ‘I have a chronic illness and I don’t want to go back to the office.’ We were suddenly in each other’s living rooms. The separation between work and home just disappeared.”

The Upsides of Opening Up

Freely expressed emotions can be good for business. Supportive, comfortable colleagues are more productive, experts say. And bottling it all up can backfire — whether it’s tension with a colleague or a crisis at home.

For instance, an employee who steps away to tend to a sick child but doesn’t say anything about it might be deemed a jerk by co-workers. But if you inform colleagues, delegate responsibilities, and lay out your response plan, it creates an opportunity to discuss relatable, real-life stressors.

“Sharing emotions tends to bring coworkers closer together,” Stephanie J. Wong, a clinical psychologist and host of The Color of Success podcast, told WorkLife. “By being vulnerable, you are role modeling that it is OK to discuss these topics at work.”

That’s exactly what therapist Shelley Prevost, founder of Big Self School, discovered when she posted about her deep burnout last month on LinkedIn. “I spent the better part of three years marinating in cortisol,” she wrote. “To cope, I was washing down a couple of Benadryls with a bottle and a half of Sauvignon Blanc almost nightly, waking up at 3 a.m. (unable to sleep), and then on to a full day of CEO-ing.”

The responses were uniformly supportive.

“There’s a belief that’s perpetuated that you shouldn’t share and that you should forge ahead and go it alone,” Prevost told WorkLife. “We don’t have to go through this by ourselves.”

Prevost, who now helps professionals recover from burnout and create better work-life balance, was initially worried there would be negative backlash to her post. Instead, the post prompted others to share their stories.

“If we suppress emotions, it usually comes out in other ways,” she said.

It’s All About Intention

In contrast to Prevost’s experience, many of the 48,866 (and counting) reactions to Wallake’s post were scathing. “Who stops mid-genuine-cry to take a selfie?” asked one commenter. “Imagine crying and thinking, ‘Oh, I better take a picture and post it later for clout on this circle [bleep] of a social networking platform,” echoed another. “Dude, it’s not about you,” responded yet another, synthesizing popular sentiment. Within hours, Instagram influencers were parodying the whole affair.

Beneath all the hot takes, it was Wallake’s perceived motivation — to gain sympathy for himself rather than his terminated employees — that fired people up.

When it comes to sharing emotions in the workplace, employees should remember to communicate what’s going on in their life succinctly and then ask for what they need.

“When people share their experiences, it provides others with context about what’s impacting their engagement and productivity at work,” said Wong. “It may open the door to see how coworkers and supervisors can assist or support them during difficult times.”

At the end of the day, when professionals get emotional, it’s typically involuntary.

“We are human,” said Lefkowitz. “We’ve had this corporate brainwashing where you’re supposed to come to work, do all the things, and then live your life separately. That’s just not real.”

Despite the public shaming, Wallake has not taken down his crying post. Rather, he’s capitalizing on its momentum, writing (on LinkedIn, naturally): “I will milk it to spread more good and kindness in the world. We need more of that.”