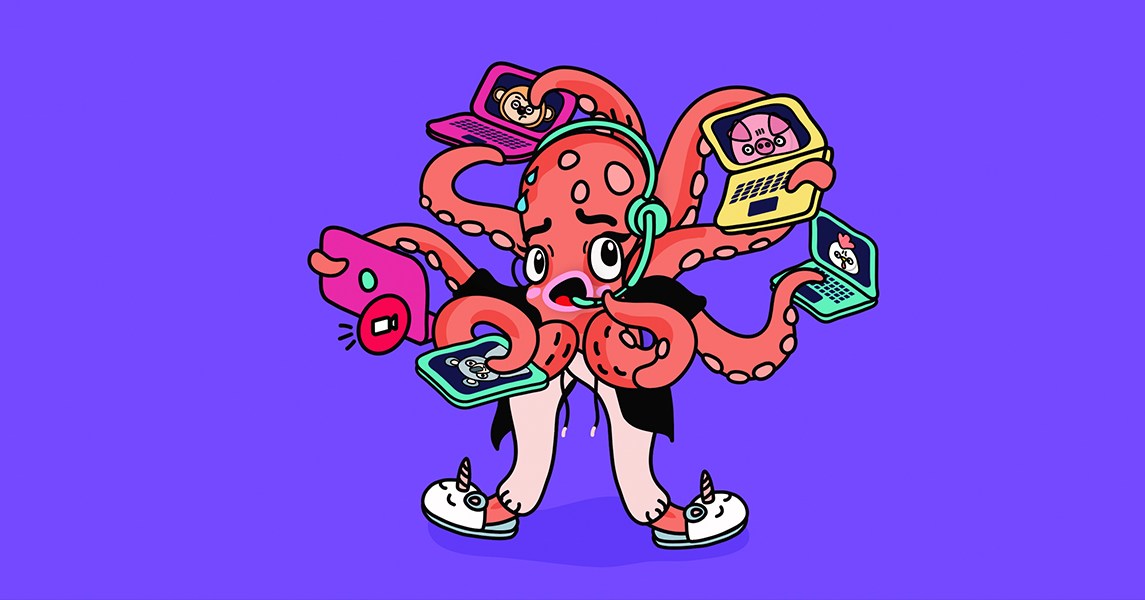 A tech company’s CEO had to recently send out a missive to his all-distributed workforce asking everyone to keep their cameras on while they were on yet another of their many Zoom meetings.

“I had to do it,” said the CEO. “I was getting complaints about people who refused to turn their cameras on, probably for pretty good reasons, but it ruined the flow of the rest of the meeting and it all became unproductive. So I had to make a rule.”

Most workers are entering week 8 of their new work-from-home existence. The initial snow-day thrill of ditching the commute has descended into depressing chaos of corralling distance learning kids, wondering if showering every other day is OK and, yes, endless Zoom calls. The thrill of glimpses into coworkers’ homes and lives on Zoom — “hey, is that “Conversations With Friends?” Loved it!” — has inevitably been replaced by Zoom fatigue. The lawless land of Zoom, where someone always doesn’t know they are muted, needs some order. A rough school of etiquette has slowly emerged.

Lurking is a common breach of etiquette, for example. In a six-person meeting, there can be one person who’s decided to, mysteriously, keep their video off, there but not there, like some kind of coronavirus-era poltergeist. Of course, reasons abound: People may be in a situation where their kids or pets are jumping all over the place, or maybe, like one exec said, they’re “hiding in the bathroom so my children won’t find me.” But it doesn’t work.

Lurking is only part of the problem. As “doing a Zoom” enters our cultural parlance and “Zooming” becomes the most common, if not the only way, to communicate, more and more stuck-at-home workers are starting to get frustrated about what they may perceive as a lack of basic manners.

“My 8-year-old’s school sent out some Zoom etiquette that I almost forwarded to my team. Basic stuff: don’t get distracted, mute yourself, cool it with the stupid virtual backgrounds,” said one ad agency employee. “Seriously, did I mention mute yourself? I stayed put. I guess it could have come off a little passive-aggressive.”

(The school’s etiquette rules include that if some kid were caught flouting etiquette, the teacher would mute that person and keep that kid muted for the entire day. This is perhaps one for businesses to emulate.)

What was once cute — look at your co-worker’s dog! What a good boy! — now is starting to feel wearying to even worrying. “I had a tech leader stand up and show their pajama pants,” said one advertising employee.

At one ad-tech company, a mid-level employee said she was “indulgent” at first about her manager’s insistence on what she calls “unnecessary, sympathetic small talk” at the beginning of every single meeting. She has, on average, four Zooms a day.

“It’s getting downright unbearable,” she said “I start every single meeting with a long, protracted recitation of what he has been doing, what he cooked, what his kids said that day, how he’s feeling, and then I have to answer, in detail, his questions about how I am, how my kids are, how I’m holding up, if I’m OK. I appreciate the concern. But for God’s sake, can we get down to business so I can get off this call.”

For another, “the Blair Witch-style tour of their house while they walk around” is where it gets too much.

Another common one is the Zoomer who clearly would like to talk about anything but business at hand. Those who derail Zooms love to do it, with with an observation about, say, a mug they’re holding, and the family story appended to it. Inevitably, the behavior will interrupt what could be a productive conversation

“I have an employee who can’t multitask but thinks he can, so all Zooms include what I like to call a ‘distraction break’ where he will make an observation about something completely different and we have to take five minutes to talk about it,” said one exec

Then of course, there’s the eating. Zoom’s active speaker view makes the act of eating (especially when coupled with the act of not muting yourself) particularly horrifying for some, especially when crunching is involved. For Lizzie Post, the author of Higher Etiquette and the great-great-granddaughter of Emily Post, coffee, or tea are OK, but “slurping” definitely isn’t. Or at least, announce it first by asking if someone minds, if you have to do it, said Post.

Some things, meanwhile, don’t need to be announced vocally, but should be said. Don’t French exit on a Zoom call: leave without saying anything at all. The wave — basically now universally loved — is a great method to use, in tandem with the subtle use of the “chat” function.

One of the strangest features of this new virtual reality that has taken a little of getting used to is that we’re all looking at our faces more than we ever did before. But some of us are looking only at our own faces, enamored, perhaps, as how good our skin looks due to having all the time in the world to sleep, or perhaps concerned with how dire it’s getting with your roots. Either way, staring at yourself, instead of at the people you’re talking to, or if presenting, looking straight into the camera, is obvious for everyone, and an obvious no-no. It also creates a sense of a performance, like you’re in this for the show that only you can watch, a grotesque narcissus falling in love with yourself instead of listening to your team.

And perhaps last, but not least, don’t be “poor Jennifer.” Don’t go to the bathroom while on a Zoom call, forget to turn your video off, or forget to turn sound off.